Crepes are very popular throughout France, but are also loved in many other parts of the world.  The word ‘crepe‘ is French for pancake,  and originates from the Latin word “crispus,” meaning crisp. In France they were originally called galettes crepes, meaning flat cakes.

The traditional ingredients include flour, eggs, milk, butter and a pinch of salt. For those of you that have traveled to France, and Paris in particular, you, no doubt, noticed the presence of Creperie stands throughout your travels, and were invited to try these irresistible treats at one point or another.

In Paris, creperie stands usually serve sweet crepes (crepes sucrees) and are generally made with wheat flour, served with fruit spreads and whipped cream.  Even ‘Nutella‘ spread has become a favorite filling.

Savory crepes (galettes, or crepes salees) are made with buckwheat flour and are always unsweetened. Popular fillings include, cheese, asparagus, ham, ratatouille, as well as select meat fillings. In Belgium, plain galettes are served with cider.

Unless crepes are made from 100% buckwheat, or any other gluten free flour mix, they are not generally gluten free, since most contain wheat flour. Be sure to check with each vendor, or restaurant, as to their gluten free status.Later on in this post, we are showing you our latest experiment, which also doubles as a product review, making crepes with chestnut flour.But first, you might be interested to know, that crepes, can also be found under different names, (and some use different flour ingredients) in the African “injera,” the Spanish “tortilla,” the Indian “dosa,” and the Mexican “sopa.” The Norwegians have an equivalent called “pannekake,” Germans call it “Pfannkuchen,” the Dutch call it “pannenkoeken,” and Italians call it “crespella.” There are many similar foods being offered by varying cultures around the world and you can learn more about it here. In Eastern European countries and Russia they are known as blintzes.

In France, crepes are traditionally served on Candlemas and Shrove Tuesday, celebrating family life, renewal and hope for good fortune and happiness. It is customary  to make a wish, holding a coin in one hand, while  holding the frying pan and flipping a crepe at the same time.  😉

Another favorite crepe in many parts of the world, but especially in France and Belgium, is ‘crepe suzette’, which is generally made with wheat flour, orange juice and/or grated orange peel and Grand Marnier.

A prepared crepe is placed in a chafing dish, topped with orange juice and/or grated orange peel, and drizzled with Grand Marnier (or Brandy). The alcohol is then lit and burns until all the alcohol has been consumed. It is served plain, or with the addition of fruit and even ice cream.

Henri Charpentier is being credited as having invented this particular dish and he describes this in his book: Life A La Henri – Being the Memories of Henri Charpentier. This book was first published in 1934 by Simon & Schuster, and a newly translated and republished edition did not emerge until almost 60 years later in its present form. If you enjoy reading biographies, or just  like to learn more about this particular food’s history, Henri Charpentier’s book is a must read and traces Henri’s career from his days as a bell boy on the French Riviera and a quick-witted apprentice in a three-star kitchen (where he invented Crepe Suzette) to his immigration to the United States, where he became famous with his renowned namesake restaurants, introducing many to haute cuisine. You can learn more about this book here.  Some additional history as well as recipes for crepes suzette can be found here.

Finally, this brings us to today’s post on gluten free crepes, using Dowd & Rogers Gluten Free Italian Chestnut Flour. We have used this particular flour in many of  our recipes, always with good results, but never ventured into trying their crepes recipe. We followed their directions precisely with one exception. We used SoDelicious coconut milk, instead of regular milk, since so many of you are telling us that you are also sensitive to dairy products. 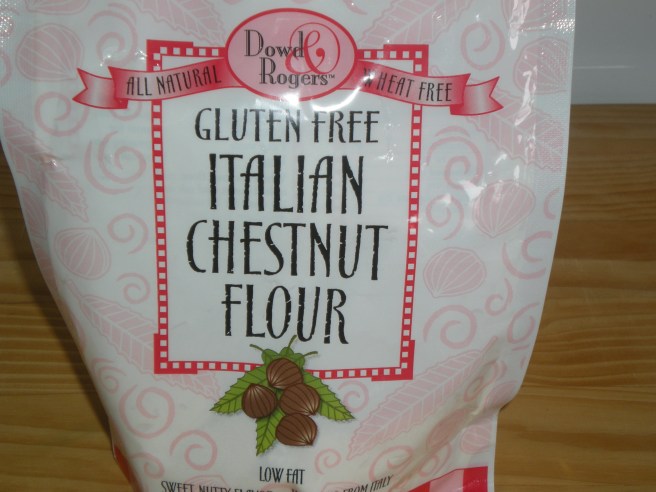 Their Chestnut Flour Crepes recipe calls for these ingredients:

The recipe asks that you whisk the chestnut flour, milk, water, egg, melted butter and salt in a medium bowl and that you let it stand for 20 minutes. Heat a heavy skillet (we used a steel crepe pan) over high heat. Brush skillet with thin layer of melted butter (or coconut oil). Pour 1/3 cup of batter in skillet and swirl batter in skillet until surface of skillet is covered. Cook crepe until its surface is dry and its bottom is golden. Flip crepe and cook other side until golden. Repeat with remaining batter.

The batter was easy to work with, but was probably a little thicker in consistency than we would have liked, due to the substitution of coconut milk for the regular milk. This could  easily be changed by adding a little extra water. I would also thin the batter with just a little extra water, after the first 3-4 crepes, rewhisking the batter.

The flavor of these crepes was excellent, slightly nutty and sweet, and they were easy to work with, and could also be served with fruit, or even crepe suzette-style. Since this was a dinner option for us, we served it with a cauliflower-cheese bake and steamed potatoes and vegetables.

We loved it and will continue to explore the many options for fillings, both sweet and savory. Let us know, how your crepes turn out and post below!