Since yesterday was a holiday, we are posting this a little later than usual. Never having attempted to make Mary Bergin’s recipe in Baking with Julia before, we approached this recipe initially with some trepidation, especially reading words like “gossamer”, “billowy” and “fluffy.” In the gluten free world, these kind of desserts can certainly be duplicated, but generally not without tremendous amounts of starch. Outside of tapioca flour (which could loosely be considered a type of starch), we are not known for the use of any other starches.Since one of us also has a sensitivity to corn, probably due to an early introduction to a  favorite German staple in baking called “Mondamin,” the use of cornstarch is definitely not a possibility. Potato starch does create the desired fluffiness many are looking for, but we feel it not only lacks the flavor and consistency we want, but it is also not a healthy choice, due to the added high glycemic load it presents, especially when combined with sugar. As you can imagine, that leaves us fewer options when desiring to make these more delicate desserts. 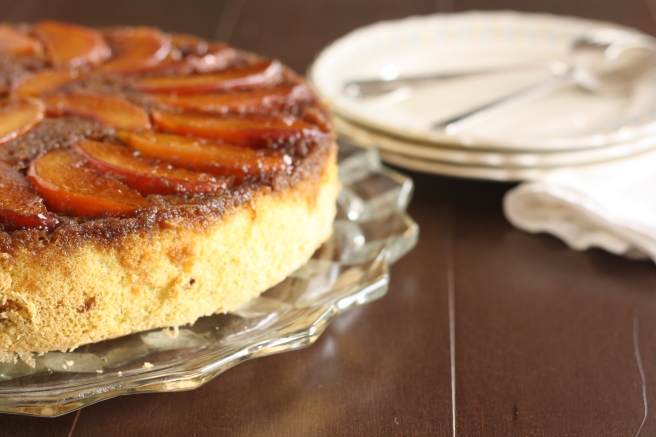 Though we have made many gluten free celebratory-type cakes before, Baking with Julia’s recipe demanded a completely  new approach, especially since it only calls for one cup of flour. Julia’s favorite motto went something like “try new recipes, be fearless and have fun while doing it.” We are paraphrasing here, but you can get the gist of her meaning. In making this recipe all of these principles were applied.

At this point, we should mention the beautiful contributions by this week’s hosts. You can find the recipe as well as the directions on making it at Marlise’s blog The Double Trouble Kitchen, or at Susan’s website The Little French Bakery. Both have outdone themselves with beautiful photographs and their own unique insights into the making of this recipe. You can also watch a clip of the original PBS series Baking with Julia here, in which Mary Bergin prepares this Upside-down cake together with Julia.

This recipe involves a multi-step process but is very easy to follow. As always, we made a few substitutions, though, this time around there were fewer than most. In the topping ingredients, we switched out brown sugar for coconut sugar and reduced the amount by one fourth, using a 3/4 cup. We also used the coconut sugar in the Streusel, along with certified gluten free oats. This is something to remember, if you are new to eating gluten free, oats, unless certified gluten free, are often cross-contaminated with other gluten grains, and can present huge health problems, if unknowingly consumed.

For the cake batter itself, we reduced the total amount of sugar by 1/4 cup and used organic evaporated cane juice, in place of regular sugar. For the flour, we used primarily tapioca flour with a smaller addition of whole brown rice flour along with one teaspoon of guar gum. It turned out that we didn’t have enough vegetable oil in the house  (we were short by 2 Tbsp.), so we added 2 Tbsp. of coconut milk instead. The same thing happened with the lemon juice (the recipe calls for 1/2 cup) and in this case we added 2 Tbsp. of water to the lemon juice to make up the difference.

As many of you know, we are not terribly fond of sugar (for health reasons), but were impressed by how well Mary Bergin’s addition of a little sugar to the whipped egg whites improved their texture and made them an ideal leavening and binding agent for our gluten free recipe. The batter was delicate, light and fluffy, much like the description in the book.

While baking, it rose to incredible heights. However, we began to worry just a little, when we tested it after 45 minutes, and again at 50 minutes, and it still wasn’t done. Still too soft in the middle, yet nicely browned on top. We ended up placing a piece of aluminum foil on top of the cake, to prevent burning and then waited. Finally, after exactly 63 minutes, we tested it again with a skewer, and, at last, it was finally done. We carefully removed it from the oven, and as called for, let it cool for about 25 minutes. To our great surprise it never sank, and we were able to easily turn it upside down onto a platter. The combination of the beautiful color of the fruit along with the spicy aroma of the cinnamon and ginger in the streusel, was a unique surprise.

The cake itself turned out to be light, buttery and flavorful, somewhat reminiscent of previous endeavors in making a similar cake with pineapple (back in the gluten days). This recipe would lend itself to the use of many different types of fruits, should nectarines not be available.

It was a lot of fun making this, especially for us gluten free bakers, since this recipe was a great success.